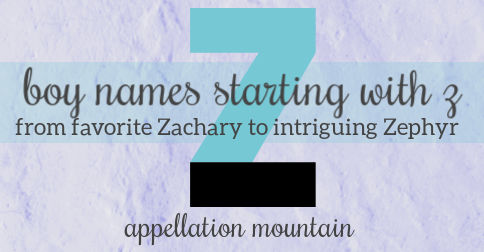 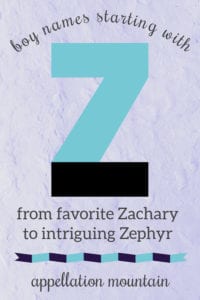 When it comes to boy names starting with Z, we all get the appeal.

The letter Z feels effortlessly cool. It’s just a little bit different. While it may fall at the very end of the alphabet, there’s something about the letter and the sound that commands our attention.

Zorro used just the Z as his mark. And Z can transform a more conventional sound – just ask the parents of Zayden.

And yet, if you’re into classic names, there are several that satisfy both requirements – all of the edge of the letter Z, but plenty of roots and tradition, too.

Add it up, and Z names for boys represent some extremes: the invented and trendy, the enduring and deeply rooted.

It’s a smaller list than many letters. A relatively small pool of names means that Z ranks 19 out of 26 on the list of most popular initials for boys’ names. (In other words, not very.) But maybe that just adds to the appeal.

MOST POPULAR Z NAMES FOR BOYS

A name both cool and traditional, Zachary is the typical English version of the Old Testament staple, Zechariah. It means “God remembers.”

Seldom heard until the late 1990s, Zion can refer to Jerusalem … or heaven.

Take Aiden, add a Z, and the result is this twenty-first century name.

Multiple origins and meanings attach to Zane. One familiar reference: legendary author Zane Grey, known for his depictions of the American West.

Xander comes from the last two syllables of Alexander. Zander makes it a little more phonetic.

Zayn means beauty in Arabic. It owes its popularity to two things: first, the crossover appeal, as it is so close to established English name Zane. But the name’s sharp rise is likely down to singer – and One Direction alum – Zayn Malik.

Another possible spelling of Zayden.

A Zachary name slightly closer to the original Hebrew Zechariah.

The Democratic Republic of Congo was formerly known as Zaire. Voltaire used Zaire as a feminine name; but the country’s former name came from a Portuguese take on a native phrase. While Zaire is nearly as popular as a boy’s name in the US today, Zyaire is more popular. Perhaps it seems slightly more phonetic?

An appealing Arabic name with a strong meaning: supporter.

This name is just plain fun to say! It comes from Zebadiah, an Old Testament name.

One of Jacob’s sons in the Old Testament, Zebulon has a long history of use. If you’ve been to Pike’s Peak in Colorado, you might know that it was named after American army officer and explorer Zebulon Pike. Well over a dozen counties and other places are named in his honor, too.

The west wind in Greek mythology, Zephyr sounds like lots of two-syllable, r-ending boy names popular now … and yet, it’s a little different, too.

An Old Testament name with a great meaning: shining.

A traditional Hungarian name, Zoltan might have been derived from the title sultan.

What are your favorite boy names starting with Z? 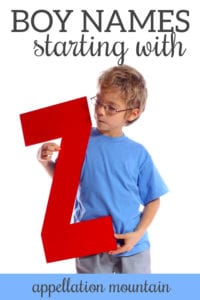 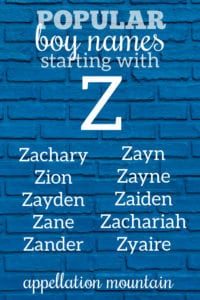 How ‘Firefly Lane’ Changed My Perspective On Miscarriage