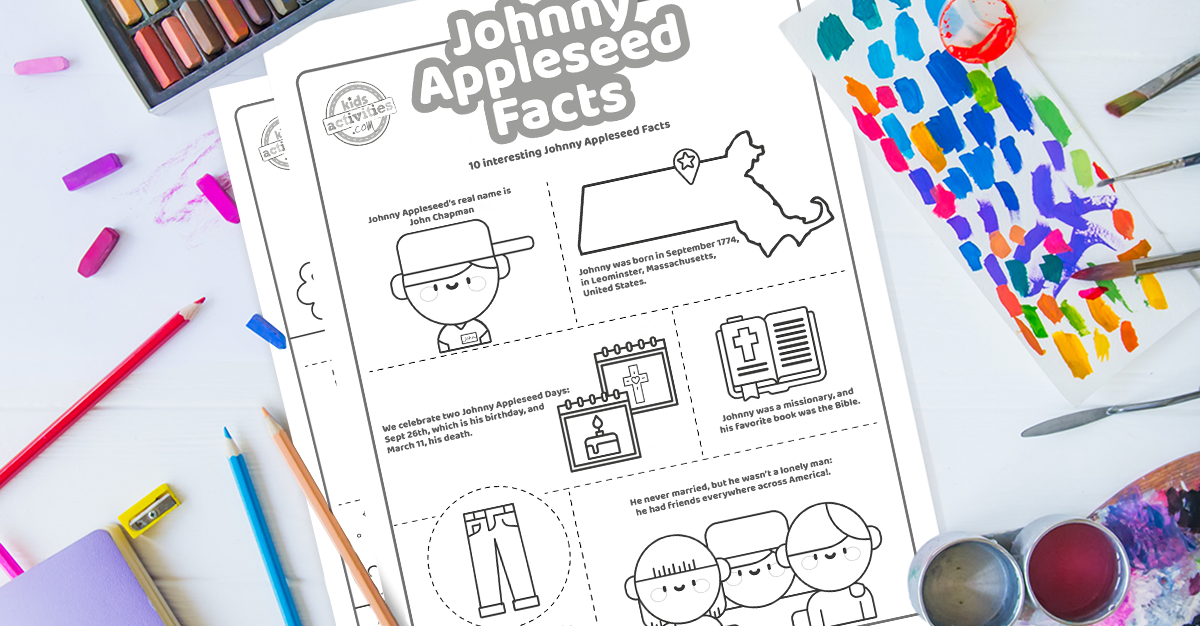 
We are back with more educational and creative learning activities for kids! Yay! Today we are coloring a free Johnny Appleseed printable while we learn some fun facts about his exciting story.

Before we get started with our Johnny Appleseed coloring page, warm up with this adorable apple printable for kids.

Or if you want a more hands-on activity, this apple craft for preschoolers is great to celebrate apple season!

Who is Johnny Appleseed?

While Johnny Appleseed Story is often considered an American folklore tale, many parts are true!

Johnny Appleseed was a man born in Massachusetts in 1774 who loved apples. (By the way, our apple coloring pages are perfect to accompany this story!)

He liked them so much, that he spent 50 years sharing his love for them by planting apple trees and apple orchards in many places!

Johnny wanted to feed as many people as possible, and that’s why he carried apple seeds with him in a sack as he traveled across the country, often barefoot.

And he traveled really, really far! He planted apple trees in Pennsylvania, Ohio, Indiana, and Illinois, West Virginia, and even went as far as Ontario, Canada!

We celebrate Johnny Appleseed Day twice a year not only because he introduced apple trees to new places, but also because he was loved by many people and made friends anywhere he went.

Is there anything better than random but cool facts? I don’t think so! For example, did you know that kangaroos can not walk backwards?

Check out these 50+ facts for kids that they won’t believe are true!

But back to our legendary story! These are my favorite Johnny Appleseed facts:

Which one is your favorite Johnny Appleseed fact? Mine is that he loved animals!

Show your love to Johnny Appleseed by making this applesauce fruit leather! They are so delicious and super simple to make!

Let your kids use their imagination!

They can use colored pencils, crayons, markers, or just anything they can think of! All you have to do is print this Johnny Appleseed coloring page on regular sheets of 8.5 x 11 inch paper and you’re ready for a fun afternoon activity!

Have you ever had a hidden and mysterious smell in your car? As a mom of 3 kids, I can’t