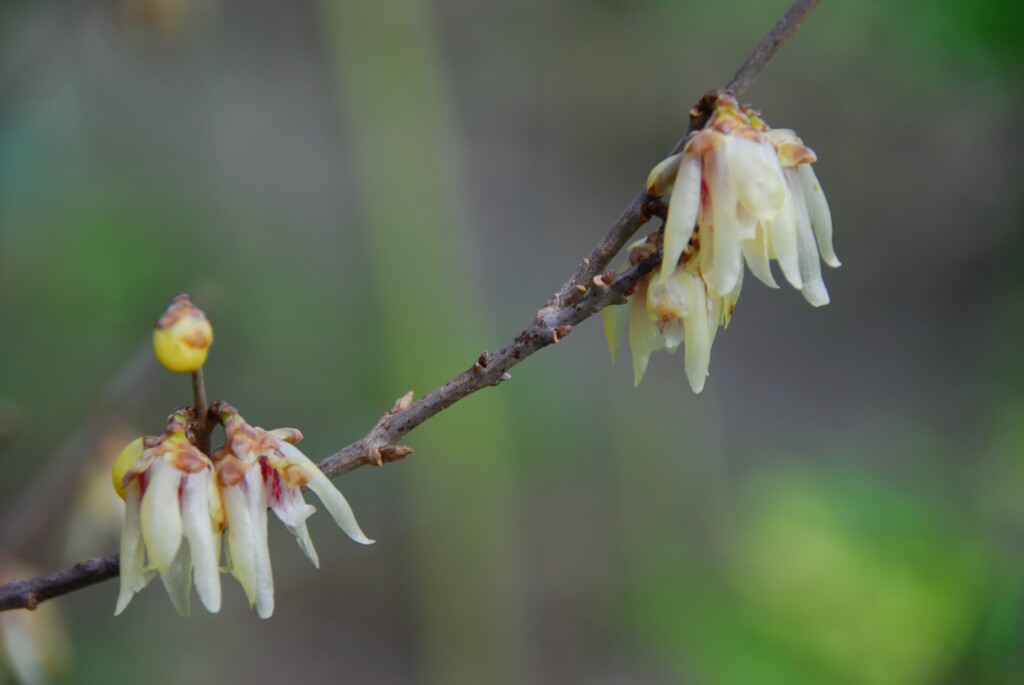 Wintersweet (Chimonanthus praecox) didn’t need this value of rarity to make it worth growing.  The perfume alone does that.  But that it truly belongs to June – the dead month – the month between the final death of one season and the birth of the next – adds enormously to its value.

My earliest memory of wintersweet goes back to a large old shrub in the botany system garden at Melbourne Uni (started, curiously, by Prof. Frederick McCoy in 1856.  No relation as far as I know) in the mid 80’s.  It was the perfume, of course, that brought it to my attention.  It’s a hard scent to pin down.  It’s complex and blended, as if someone’s added a drop of this, taken a sniff, then added a drop of that until they achieved an elusive – almost mystical – balance.  It’s warm, like wallflowers.  It’s sweet, like freesias.  And there’s a note of assertion, like jonquils.

It’s kind of fitting that this other-worldly perfume arises from a very humble, unprepossessing flower.  Mostly these are of a dirty yellow, hanging with inelegant insistence from leafless twigs of graceless angularity.  At best you could describe the blooms as looking like they’re formed of wax.  At worst you could think that they put you in mind of the semi-transparency of a lettuce that you’ve found frozen at the back of the fridge.  There’s a kind of water-logged look about them.

But none of that matters.  What matters is the perfume.  In June.

In leaf, throughout the summer, this is a shrub you don’t really need to see.  The leaves have a raspy, slightly sand-papery quality that makes for a very flat green.  Consequently wintersweet is at its best at the back of a deep shrub border, or somewhere well out of the way.  Having said that, the most interesting use of it I’ve ever witnessed was as a wall shrub on a circular wall at Hestercombe, where strict training transformed it into something almost unrecognisable.

As far as I’m aware, all stock of wintersweet in Australia is seed grown.  This makes for a lot of variation in flower colour, quality and, so I’ve found to my chagrin, flowering times.  A plant I purchased about seven years ago, now quite large, doesn’t want to flower until late winter.  That offends my mostly well-founded conviction that wintersweet is a June thing.  It was in my past, and I insist that it remain so.  I’m on the hunt for a new one, and I’ll make sure it’s flowering when I buy it.  In June.

When does your wintersweet flower?

And do you hide it away, or have you managed to make it worth seeing?